We’ve all seen those astonishing photos of wild salmon flying upward against rushing waters as they travel home to spawn. Equally as familiar is the Grizzly bear waiting expertly for a lucky catch. Salmon are emblematic of the wilderness in the Pacific Northwest. More importantly, they are the

keystone species of the region and play a crucial role in sustaining healthy ecosystems. In recent times, the abundance of wild salmon in the Northwest has been declining steadily without any significant recovery. The reasons for this decline are numerous and interrelated. So, what is happening to the salmon, and why is it so important to protect them?

About Salmon and Their Habitat

The Pacific Northwest is a region of North America that includes the province of British Columbia, along with three U.S. states — Washington, Oregon, and Idaho (World Atlas). This region is the breeding ground for Chinook salmon. A study of their spawning sites identified around 183 sites within the Yukon River Basin, alone. Some salmon even traveled more than 3200 kilometers to reach these destinations 1.

The Northwest is home to seven different species of Pacific salmon: Pink, Sockeye, Coho, Chum, Chinook, Steelhead, and Cutthroat. All salmon species are born in freshwater, migrate to the sea where they spend most of their life, and finally return to freshwater to spawn (EPA). The Chinook is often called the King salmon, because they are the largest species, ranging between 10-30 pounds. They are also the most vulnerable and least abundant salmonid species (South Puget Sound). Salmon help to sustain pristine ecosystems, and thus require pristine conditions themselves (Wild Salmon Center). This is what makes them such excellent indicators of ecosystem health.

In the fall of 2017, The Seattle Times reported on the shockingly low numbers of juvenile salmon documented by scientists during the spawning season. The number of salmon was the lowest it had ever been in 20 years of data collection, and there were several times that the scientists’ nets captured no fish at all. The results were linked to an uncharacteristic surge of warm water from the coast which made the environment less suitable for salmon and more suitable to tropical fish, some of which are predators of juvenile salmon (Mapes). The abundance of Chinook salmon has decreased by around 60 percent since 1984, and the salmon that live in the region today only make up about 10 percent of their former numbers (EPA). The decline in salmon populations cannot be attributed to one single cause, but rather a culmination of detrimental conditions caused by human development and pollution.

The biggest threat facing Northwestern Pacific salmon was once severe overharvesting by humans, but it is now habitat loss. This is especially prevalent in places that have developed rapidly, such as Japan, California, Oregon, and Washington (Wild Salmon Center). Salmon habitat can be destroyed by deforestation, agriculture, urban development, and coastal development (EPA). The juvenile stage of Chinook salmon is a highly crucial time, and the salmon’s ability to forage determines their ability to survive 2. In a study from 2015, scientists found that habitat loss may increase the effect of density on salmon’s ability to forage for food. In other words, as wetland area decreases and hatchery salmon are released into the area, the wild Chinook have less resources and there is increased competition for those resources 2. In addition to decreasing the resources available to salmon, land use changes by humans can directly affect the conditions of salmon habitats. Deforestation reduces the shading in wetland ecosystems and warms the streams that Chinook inhabit, making the water unsuitable to their habitat requirements 3. 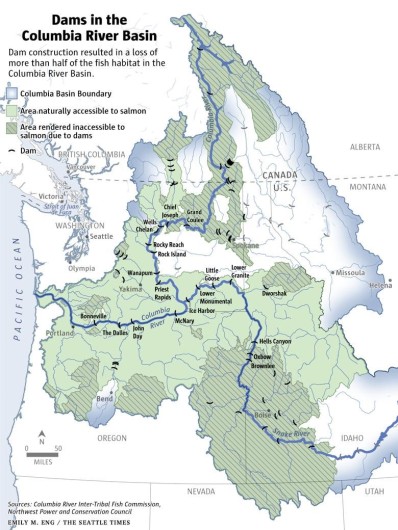 As wetland deforestation increases the temperature of coldwater fish habitats, climate change is likely to exacerbate the problem. Scientists propose that habitat restoration could reduce the effects of climate change, but all salmon ecosystems will likely be affected to some degree 3. Projections of water temperature in the Columbia River from 2018 predict that a temperature increase of 1-3 degrees Celsius could increase the thermal exposure of Sockeye salmon by 5-16 percent 4. The increase in thermal exposure will affect the habitats of all coldwater fish and may even cause some ecosystems to become completely uninhabitable. While examining the effects of climate change in the Northwestern Pacific watershed, scientists determined that the upper Umatilla Sub-basin of the Columbia River basin will be the most affected by extreme climate change, experiencing temperature increases and lower stream flows due to drought 5. As the effects of climate change continue to increase in intensity, models of specific regions like the Umatilla sub-basin will be necessary to inform policymaking.

One of the lesser known pressures on wild salmon has been a steady decrease in genetic and species diversity. This affects Chinook salmon, in particular. Researchers from Oregon State University explain that most studies of salmon populations in the Northwest have focused on abundance rather than diversity. Diversity is important, because it allows salmon to take advantage of different habitats and resources, making them more versatile (Oregon). The introduction of hatchery salmon to make up for the low abundance of wild salmon has caused many complications for the fish industry. Since the 1900s, when hatchery-bred Chinook were released into the Columbia River, total harvests have decreased (Oregon). Competition between Hatchery-bred fish and wild Chinook restricts the Chinook from developing diversity among themselves (Oregon). Lack of genetic variability makes the salmon more susceptible to things like climate change, pollution, and disease. Species that inhabit warmer streams can also start to crowd out species with more specific requirements as climate change worsens. Hatchery-bred fish, along with Pink and Chum salmon, are less 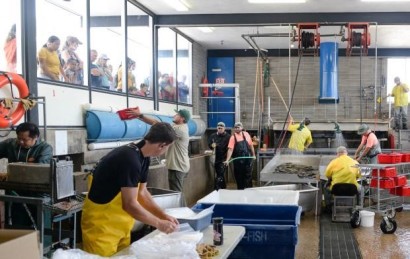 vulnerable to warming temperatures, and now consist of more than 90 percent of total salmon 6. Salmon species may also compete with each other, causing some populations to become seriously threatened. Sockeye, Pink, and Chum salmon have become more abundant, and some scientists are raising concerns about how they may harm the growth or survival of other salmon species, like Coho and Chinook 7.

Why are Salmon Important?

Wild salmon are keystone organisms in Northwestern Pacific ecosystems for their role in nutrient cycling. During their time at sea, salmon enjoy diets containing abundant marine nutrients like phosphorus and nitrogen. They accumulate and store these elements in their bodies as they mature. When the salmon return to the headwaters of freshwater rivers, they transfer those nutrients to the river ecosystem through normal bodily functions, like urination (Wild Salmon Center). The nutrients are also introduced into the environments surrounding the rivers when organisms feed on the salmon and then enrich the soil and forests through defecation. Those healthy forests then contribute to the stream environment by dropping foliage into the water that provide shelter to salmon and add nutrients when they decay (Wild Salmon Center). Salmon are a source of food for many different species, including orca, grizzly bears, seals, and humans. When they die after spawning, they become food for small invertebrates and microbes (EPA). In salmon-rich environments, bear populations flourish and the bears perform several ecosystem functions. They play an important role in the seed dispersal of several plants, such as Devil’s Club and Blueberry 8. By this mechanism, salmon encourage the survival of various plant species.

Wild Chinook salmon are the primary source of food for both harbour seals and killer whales. The Southern Resident killer whale population is critically endangered, which can be attributed to the depletion of successful pregnancies 9. Around 69 percent of pregnancies within the population were unsuccessful between 2008 and 2014, and this is largely because of the lack of large, abundant Chinook 9. Another predator of Chinook salmon is the harbour seal. There is a significant connection between the seals’ predation of juvenile Chinook and diminishing Chinook populations 10. Because food is scarce for the young fish, they must forage more, and this leaves them more vulnerable to predators like seals 10.

An organization devoted to protecting Northwestern salmon called the Wild Salmon Center has said that protection efforts have been unsuccessful because they have always been initiated too late. Instead of waiting until disaster strikes, they suggest that we protect “salmon strongholds”, the most intact salmon habitats (Wild Salmon Center). Northwestern salmon are facing ever-intensifying challenges, and we will need to find better ways to safeguard this keystone species. In addition to their intrinsic value, wild salmon have important implications for ecosystems and humans. We must be proactive when managing the fish as a natural resource, prioritizing the conservation of pristine salmon habitat that already exists.

Video 1: The Stillaguamish tribe in Washington works to save salmon https://www.seattletimes.com/seattle-news/environment/hostile-waters-orcas-chase-a-memory-of-salmon-to-california/, accessed Nov. 9, 2019.

by duquark in Letter from the Editor

Dear readers of The D.U. Quark, To say that it is important to stay informed in today’s world is an immense understatement.  Rachel Carson, the most obvious example [...]