In recent years, the debate of the existence of global warming has made its way to the forefront of the American political sphere. There is no shortage of politicians on Capitol Hill that have some very strong opinions on this topic—just this year, our own president joked about how he wanted global warming to “come back fast” because of record low winter temperatures in the American Midwest. But there is one thing that 18 different American scientific associations, including American Meteorological Society and the U.S. National Academy of Sciences can agree on: global warming is real, and it’s no joke.

Global warming is a phenomenon defined by the NRDC as the sudden spike in global temperatures over the past 50 years. This sudden spike is due in part to an increase in greenhouse gases—compounds like carbon dioxide and methane that trap heat—in the Earth’s atmosphere. On a normal, healthy Earth, greenhouse gases are crucial for life to exist. Thanks to these gases, sunlight and solar radiation that bounces off the Earth’s surface is retained in the atmosphere, creating a controlled climate without any extreme fluctuations in temperature. We have the greenhouse effect to thank for livable temperatures; without them, we’d be like our neighbor Mars, whose temperatures can fluctuate up to 180o F in a single day! 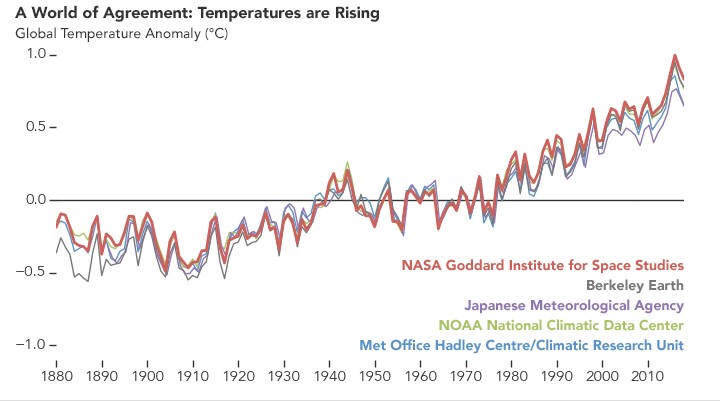 Figure 1: Research from these scientific institutions from around the world all lead to the same conclusion: temperatures are rising, and fast (picture courtesy of nasa.gov)

Sadly, due to increased carbon dioxide levels in the atmosphere, the unique properties of the Earth’s atmosphere are beginning to work against us. Extensive scientific research around the world, as seen in the picture to the left, illustrates a disturbing result of this increase in greenhouse gas: a steady rise in global temperatures. Greenhouse gases produced as a byproduct of industrial processes are undeniably to blame, with coal-burning power plants and automobile emissions being the two biggest contributors of greenhouse gases. So why should we care that the world may be getting slightly toastier? The scary truth of the matter is that a little rise in temperature can mean a lot of catastrophic changes where you might not expect.

According to data collected by NASA, global warming from an increased amount of greenhouse gases has caused an exponential melting of the polar ice caps. Within the past century, global sea levels have risen 8 inches—this initial rate of melting has nearly doubled in the past two decades alone, and accelerates more every year. Think about some of the major coastal cities in the world—Shanghai, Miami, New York City—and then think about how many people could be affected by rising sea levels in these densely populated urban areas. Another huge problem, caused more by an increase in carbon dioxide than global warming itself, is ocean acidification. When carbon dioxide in the air interacts with water, the pH of the water itself becomes more acidic. In fact, NASA reports that the amount of carbon dioxide that the ocean surface absorbs is increasing by about 2 billion tons per year. Ocean acidification has already devastated coral reef populations and has driven many species of marine life to near extinction. If such a phenomenon is allowed to continue, the fishing industry—an industry that employs and feeds billions of people around the world—will no doubt be at risk too. Not to mention the widespread smog and air pollution that global warming could cause. Imagine a world where clean air isn’t even a guarantee; with the threat that global warming poses, our grandchildren might not have to just imagine it.

Figure 2: Smog is a direct result of greenhouse gas pollution emitted by automobiles. This shot taken in Los Angeles, CA shows that the problem is closer to home than most would think. (picture courtesy of Christina Elston)

You may be thinking that surely all this evidence can’t just be ignored by the people that run our country, right? While Capitol Hill is home to some great environmentally-focused politicians, unfortunately they seem to be in the minority. With the rise of the Trump Administration, global warming appears to be an issue that’s been shoved under the rug. The hard work done by the Obama Administration towards the promotion of clean, renewable energy has been nearly undone by the Trump Administration—by withdrawing from the Paris Climate Accord and repealing the Clean Power Plan, the Trump Administration has ensured that America’s carbon footprint will increase exponentially.  In addition, just this February, the Trump Administration made the decision to scrap the Safer Affordable Fuel Efficient (SAFE) Vehicles Rule proposal. The SAFE Vehicles Rule proposed to reform greenhouse gas emission standards for cars made after 2021, forcing car manufacturing companies to design more fuel-efficient cars with less of a carbon footprint. With the planet burning up and the government making no moves to fix it, we as inhabitants of the planet Earth only have one choice left: to take matters into our own hands.

The most important thing to remember when fighting climate change is to not underestimate the impact that you, an individual, can have. There are many small changes that can be made in your daily life that can exponentially reduce your carbon footprint. Some of these things can be as easy as carpooling to work or school, snuggling up with a blanket when you’re cold instead of cranking your thermostat up, or paying a few extra dollars for energy-efficient appliances. All of these things will help reduce the amount of carbon dioxide being put into the atmosphere—and every change, no matter how small, helps. This being said, one of the most powerful tools for fighting climate change at your disposal is your own voice. Be educated about the issue, be vocal to friends and family about why you care, and let your representatives know that you care about climate reform. Get out to the polls and make a point to vote for candidates you know will take such a dire problem seriously. After all, if we’re going to save the planet, we have to start somewhere. by Morghan Hyatt   For researchers to connect with the public about epidemiological studies, there must be a mutual understanding between the scientists and members of the [...]