Prions are pathogenic molecules which cause prion proteins, found abundantly in the brain, to fold improperly. In the following review, I will discuss the source of prions and the fundamental biochemical pathways which cause the prion proteins to misfold. I will also elucidate the factors that determine which form of disease the prions differentiate into.  Prion diseases include Creutzfeldt-Jakob Disease, Bovine Spongiform Encephalopathy, and Fatal Familial Insomnia.  This discussion will also analyze various benchmarks in brain atrophy and symptoms by which the progression can be judged.  The survival rate of prion diseases is zero percent, and current treatments only temporarily hinder the afflictions.  Finding a pharmacologic or immunotherapeutic solution to prion replication would drastically increase quality of life for infected patients.

The prion protein (PrP), an abundant protein in the brains of animals and humans, resides in the body as a benign molecule whose purpose is thought to be a nerve protector.1 Prion proteins, however, can become distorted (PrPSc) and have disastrous effects on the body.2 Prions are infectious pathogens that cause normal prion proteins to misfold and thereby incite neurodegeneration.1-2 This neurodegeneration is difficult to combat because it manifests itself in diseases that are highly dissimilar to viruses and bacteria.1 Among these prion diseases are Creutzfeldt-Jakob disease, Kuru, and bovine spongiform encephalopathy (commonly known as Mad Cow Disease).2 These diseases, some of which are zoonotic, all cause atrophy of the brain that leads to death.1-2

Although they are not particularly common, prion diseases are a crucial subject to science because they represent the deadliest set of diseases on the planet, with a 100 percent fatality rate.2 A cure to these diseases would prevent further psychological damage and drastically increase survival rate among infected patients. However, little knowledge exists on the purpose of prion proteins; more research is required to determine why they exist and what they do.  This review will discuss the primary cause of prion diseases, disease symptoms and progression, and treatments and current research.

CAUSE OF PRION DISEASES

Infectious prion proteins stem from abnormal isoforms of the normal prion protein found in the brains of animals and humans.1 Biochemically, prions cause a point mutation in the genes of PrP which prevents them from folding properly—these infected proteins cannot be broken down and accumulate in the brain.2 The point mutation was found via comparing the sequences of healthy and infected prion proteins.3 It is unknown how exactly prions cause the point mutation, but the substituted nucleotide on the C-terminal end prevents proper folding.4-5  A study conducted on mice in 2016 found the exact nucleotides affected in PrP genes, along with where prions concentrate in the brain.3 Mice were infected with prions and the disease phenotype was associated with a particular region of the gene.3  It was found that the codon 129 genotype distinguished between Creutzfeldt Jakob Disease (valine substitution) and Fatal Familial Insomnia (methionine substitution).3 The study also indicated that misfolded prion proteins disrupt the activities of essential ion channels in the brain—a primary cause of death.3 The voltage-gated calcium channels within plasma membranes were blocked, leading to inhibited neurotransmission and muscle control.3 All prion diseases are caused by the same PrP, but the codon 129 genotype and secretory transport interference dictate the disease subtype and symptom severity.

Another important concept is distinguishing between causes of different prion disease strains.  All types of prion diseases can be either genetic or spontaneous, both similar in that they require the codon 129 mutation.4 A study investigated the cerebrospinal fluid (CSF) of postmortem subjects to determine whether CSF characteristics could predict disease subtype.6 In sporadic CJD, patients exhibited higher protein accumulation and rate of health decline.6 In genetic forms, however, the PrP conversion was not as strong or rapid.6  In other words, sporadic prion diseases demonstrated much faster symptom progression than genetic (hereditary) prion diseases.

SYMPTOMS AND PROGRESSION OF PRION DISEASES

Prion diseases are heterogenous and neurodegenerative, leading to brain atrophy over time.2  CJD, bovine spongiform encephalopathy, and Kuru all lead to physical afflictions initially such as muscle stiffness, difficulty walking, and speech problems (Figure 1).1-2 In later stages, mental integrity unravels as the patient experiences rapidly developing dementia, hallucinations, and confusion (Figure 1).1 While FFI is denoted by severe sleeping disorders and autonomic system dysfunction, dementia and motor abnormalities are more evident of CJD.3 To date, no studies have been done to compare the onset of symptoms in spontaneous versus inherited disorders. Behavioral changes were found to be present in about 80% of all prion disease cases within 100 days of symptom onset.7  Furthermore, prion disease types differ in symptoms according to atrophy of particular cerebral regions.1  Researchers conducted a longitudinal voxel-based morphology study to determine whether the degenerative regions corresponded to a specific clinical assessment.8 Patients’ ability to feed themselves and problem-solving skills decreased with the degeneration of particular brain regions, as indicated by a prion disease rating scale and neurological exam.8 In addition, there was significant volume loss in the thalamus and basal ganglia, medulla and pons, hippocampal formation, and the superior parietal lobules (in that order).

Progression of prion diseases sometimes takes years to manifest in affected patients.  One study analyzed the relationship between PrPC (the host-encoded PrP) and PrPSc (misfolded prion protein).9 Using mice it was ascertained that PrPC levels are lowered with a host response, leading to decreased PrPSc.9 This means that prion disease progression varies widely depending upon host response. This progression, in some cases, could last for up to a decade.  Early on in the manifestation of prion diseases, a period was found where the patient was asymptomatic.10 In 2017, an experiment involving mice identified the asymptomatic phase of prion diseases.10 The mRNA in infected cerebral mouse cells was sequenced and compared with RNA in normal cerebral mouse cells.10 A gene called Cst7 was expressed in staggering levels in the asymptomatic infected mice compared to the control group mice.10 Cst7 coded for Cystatin-F, a cysteine inhibitor that assists in immune regulation.10 This means that Cst7 is a viable biomarker for detecting prion diseases in recently infected patients.

A prominent issue has been identifying prion diseases early in the disease progression.  An experiment for detecting variants of CJD early on in its manifestation was tested on necropsy patient tonsils.11 This study took 8 tonsil biopsy samples and compared the PrP they contained with CJD-infected PrP, and the samples matched.11  If this method were to be applied to live patients, prion diseases could be discovered long before the degenerative symptoms occurred and therefore improve quality of life.

Prion diseases are the only diseases to exhibit a fatality rate of 100 percent, and there is no cure for them.1 On average, all forms of prion diseases are lethal within about a year of the onset of symptoms.1 Although there are no known cures for prion diseases, scientists are researching methods of stalling their progression and combatting the prions themselves.  A study used quinacrine and chlorpromazine to determine the prion-resistant properties of these pharmaceuticals, which are normally used as antimalarial and antipsychotic drugs.12 The experiment used effective concentrations (EC50) of 0.3 micromolar to 3 micromolar of these derivatives in infected PrP cells.12 The experiment showed that tricyclic compounds containing an aliphatic side chain as a whole can inhibit prion formation, which makes quinacrine and chlorpromazine viable candidates for prion disease patients.

Researchers are exploring immunotherapeutic techniques that might inhibit prion formation altogether.  A study examined an antibody immunotherapeutic solution to prion diseases.13 Human prion proteins were injected into mice that were intolerant to PrPC, inciting anti-PrP antibody development.13 The PrPSc levels decreased, despite high initial PrPSc concentrations.13 Ultimately, mice which underwent continued antibody treatment lived over 300 days longer than mice who went untreated.13 These results signify that antibodies could be used to obstruct disease progression in human prion disease patients, regardless of the disease stage.  Another potential antidote was identified genetically in 2015 in a Papua New Guinea population.14 The G127V PrP mutation (featuring an amino acid substitution) was tested in mice against the most common prion disease strains.14 On the gene containing G127V, a methionine was located at codon 129.14 It was completely resistant to Kuru and some forms of Creutzfeldt-Jakob disease, but still succumbed to a few CJD strains.14 A method of harnessing this prion-resistant PrP form would render people invulnerable to specific prion diseases.

In addition to drugs and immunotherapeutic techniques, natural prion inhibitors are also being explored.  Recombinant prion proteins (rPrP), expressed in bacteria, were tested in vitro for their effect on prion propagation.15 The prion replication was inhibited, as infected PrP concentrations only marginally increased with the addition of rPrP (roughly 50 nanomolar).15 The study used only bovine spongiform encephalopathy as a subject, but further studies could show efficacy for other disease types.

Prion proteins are proteins that are commonly found in healthy conformations in the brains of animals and humans.  Prions are infectious molecules that cause PrP to misfold and obstruct essential ion channels in the brain, leading to prion diseases.1, 6 The most common forms of these diseases are Creutzfeldt Jakob Disease, bovine spongiform encephalopathy, and fatal familial insomnia.  Although prion disease symptoms such as muscle stiffness seem harmless initially, they quickly progress into sever dementia and blindness within just a few months.1-2 Currently, there are only experimental methods of prolonging the lifespan of infected patients.1  Present research on quinacrine and chlorpromazine along with anti-PrP antibodies demonstrates auspicious results.12-13 These drugs effectively stalled the progression of the disease even if they did not cure it, which is promising for future studies in humans.  Further research with these experiments could yield an antibody that prevents prion formation and replication entirely, eliminating the disease permanently after it has infiltrated the bloodstream.

Figure 1.  Physical and Psychological Symptom Progression of Prion Diseases.  A flow chart of the order and length of typical symptoms is shown over a period of six months.  The physical symptoms, listed above the timeline, begin first with muscle stiffness and difficulty walking.1 The psychological symptoms, listed below the timeline, start with hallucinations and confusion.1-2  Symptom severity increases with time and typically ends with a coma. 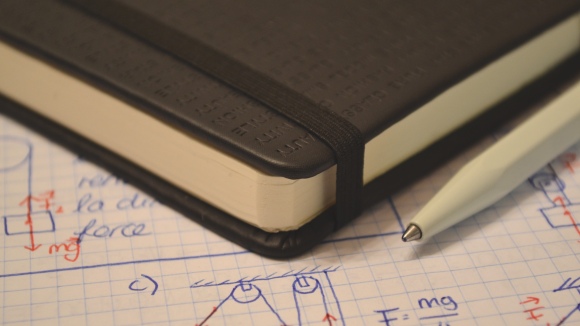 Journeying to the Heart of the Matter

By Madeline Galbraith On December 5th, 2016 Dr. Douglas Higinbotham, a staff scientist from Thomas Jefferson National Accelerator Facility, took us on a journey to discover [...]